The Castellers: The importance of teamwork

Discover more about this tradition that has a lot of value for us at PCG. We explain its origins, what it is and why it seems a good example of teamwork. 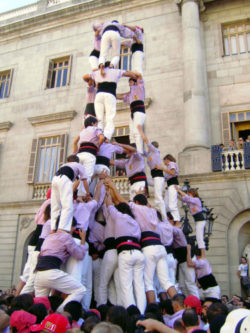 “Castells” means castle in Catalan. This tradition that consists in the construction of human towers is of Catalan origin. It comes from Valls, Tarragona and exists since the 18th century.

These human castles are composed of a base, a trunk and a crown. The crown is usually composed of children.

The base or “pinya” is the first floor, the only one that touches the ground. It consists of a large number of people standing around the tower. They serve as an anti-fall protection, but also strengthen the structure. This part is horizontal and rests all the accumulated weight.

The trunk consists of several floors. It is a group of people stacked, one above the other, feet on shoulders. Each floor is made up of 1 to 12 people, depending on the size and type of castle.

The crown is composed of one floor or more. It can be a child, a girl (“enxaneta”) or a group of children. They have to climb the tower, which is why they are usually children, due to their agility and weight.

To get enough stability and achieve your goal, a team effort is necessary. It requires that each one do its function well so that the crown of the castle reaches the top.

At PCG, we are a small team and team work is even more important to us. Whether it is internal or with our suppliers, we care about cooperation.

Our team gathers different skills, just like a human castle to a certain extent. We have technical skills, experience in the sector, creativity, communication and customer service. Together, we can offer you special attention and more important care of your projects.

If you need a personalised quotation or would like our team to provide you with assessment for your projects, please feel free to contact us. We are a team of professionals from the sector that will look after your project from beginning to end.

This website uses cookies to improve your experience while you navigate through the website. Out of these, the cookies that are categorized as necessary are stored on your browser as they are essential for the working of basic functionalities of the website. We also use third-party cookies that help us analyze and understand how you use this website. These cookies will be stored in your browser only with your consent. You also have the option to opt-out of these cookies. But opting out of some of these cookies may affect your browsing experience.
Necessary Always Enabled

Any cookies that may not be particularly necessary for the website to function and is used specifically to collect user personal data via analytics, ads, other embedded contents are termed as non-necessary cookies. It is mandatory to procure user consent prior to running these cookies on your website.